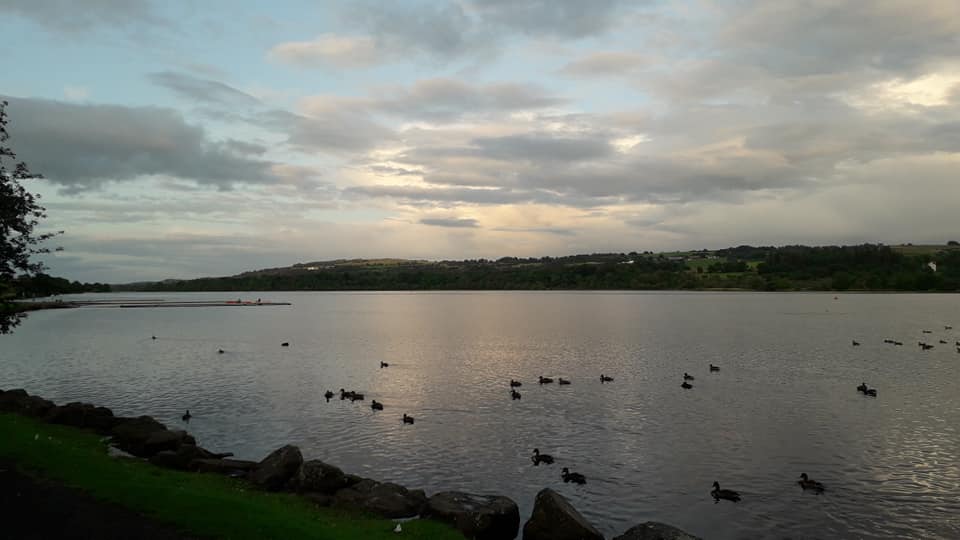 The Tour of Clydeside is a series of races over five nights.  Two races are on road while the other three are on trail.  A group of running clubs in the Glasgow area each take it in turn to host an event each night with cumulative times deciding the overall winner.

The series is similar to the Tour of Fife which I have completed 8 times – this is to be my first Tour of Clydeside and I am interested to see how they compare.

Tourists – these are the people who come and run one race

Lochwinnoch is on the other side of Glasgow heading towards Irvine.  It turned out to be quite a trek to get there and I only just made it.  On the way there we passed through many torrential rain storms I was wondering what would be waiting for tourers and tourists when I made it there.

The weather for the race turned out to be pretty good, no rain and only a light breeze pretty good running conditions.

The race itself is flat, on tarmac and out and back along a cycle path.  The start is narrow and I got caught in the group.  I went a bit too fast breaking out of the group.  On the upside I did record one of my fastest 5km times of the year in the first 5km of the race!!  A few people passed me before the turn and a couple just after the turn but I managed to keep my position throughout the rest of the run.

The course was fine, pretty sheltered and pretty flat.  On the way back you got glimpses of the Loch.  Apart from the first km I managed to keep a steady pace and was able to gradually increase my pace through the second half of the race and finished in 40th position out of 137 runners.  After day one sitting in 32nd place in the Tour.  Remember only Tourers have their overall positions counted for the entire Tour.

Day two gave us something completely different.  A trail race around Lin Park in Glasgow.  The race started in what looked like a clearing in the centre of the park.  It turned out to be a really interesting route.  A quick dash down a path before turning into a narrow, muddy trail route.  For a short period escaping back onto grass before crossing a bridge onto the trail, steps and the climb.  Running it for the first time you had no idea what was coming next.  You cross another bridge before starting a climb up a grassy hill to more trail and a nice bit of downhill.  It was at this point I was really hoping it wasn’t too laps as I did not fancy those steps again!  Thankfully it wasn’t, a run along an undulating trail path took you to this finish.  The race was just shy of 7km which nobody was complaining about.  I finished in 47th out of 135 in 35.47 – in the overall Tour Standings I slipped to 34th place overall. 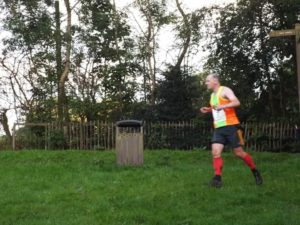 Day three and it was back to roads again.  The weather Gods were not particularly kind when we arrived in Dumbarton.  Steady to heavy rain for most of the race leading to it being renamed the Dumbarton Dreich!!

A really good course however, taking place in Leven park it is raced over three and ¾ laps.  It turned out to be quite undulating throughout the course.  A tough course for Day three of a Tour when competitors are suddenly taking much more interest in people’s numbers trying to find their rivals for the week!  The interesting sideline to this Tour is the Tourers who are on Day three taking on the Tourist many of whom are taking on their first run of the week.

Despite it being laps it was again an interesting route, you could see the other runners throughout most of the course.  The wet weather actually made for really good running conditions.  I think we were all glad it wasn’t this wet for Toota-Linn! 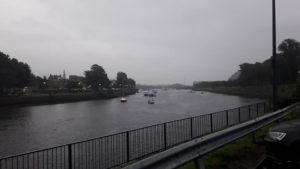 Day 4 took us back into Glasgow for the Grascube Gallop and back onto the trail.  From the way people were talking about this run this is the signature race of the Tour.  A four lap trail run through woods.  It was quite technical in places with narrow passes.  There was a climb with steps added in for good value.  After the rain it was also very muddy in places.  I am not usually a fan of laps but this was a great little route and again a real tester after three days of running.  A lot of thought was needed in this race to find the right route through the trail, one wrong step and you could be knee deep in mud.

A new set of tourists joined the tourers and at times it was easy to spot them with the fresh legs bounding up the hill!!  The race was just over 4 miles and I finished in 48th place out of 137 runners.  I thought I was destined to fall down the rankings but it turns out I was 30th among the tourers in the race and held onto my position of 31st in the overall tour.  One more race to go….. 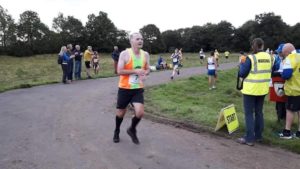 The final day and the Bella Belter.  I expected this to be in Bellahouston park but it turns out it is named after the club who organises it and it is in Pollock park.  Back onto the roads and the longest race of the week at 10km.  A run out from the rugby club, a couple of laps of Pollock before returning back.  It was also the last chance to catch rivals before the final standings were announced.  I was in a close competition with two others with only 14 seconds between the three of us.

A bumper field was assembled for the last race of the Tour. I made sure I was close to my competitors. For the first couple of kms it is flat and fast and then you enter the park.  There are a couple of climbs which are not obvious at first though when your legs start burning you really start to feel them.  After 4km I felt the last five days catch up with me as I was passed by quite a few people but tour spirit and a place to try and hold onto my position in the tour helped to pick the pace back up again.

I finished the 10km in 43.33, my second fastest of the year, not bad considering I had been running for five days.  I finished in 70th place out of 206 runners.  However in the Tour I was 27th and had my highest placing of the week and managed to climb to finish in 30th place overall.  How did I get on against the person I was chasing?  It turns out I was chasing the wrong person, they were five places ahead of me in the Tour!  It did help my get a good time though. 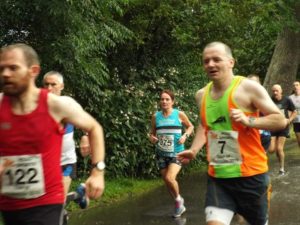 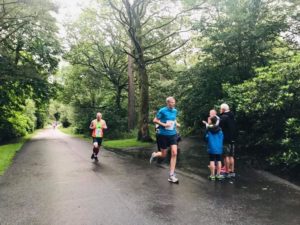 And then it was over.  How does it compare to the Tour of Fife?  There is no way to compare them in all honesty they are very different events.  The Tour of Fife has races on multiple surfaces and distances where Clydeside is on road and trail and all between 4 and 6 miles.  In the Tour of

Clydeside different clubs organise each event giving it a different feel each night.  Having fresh legged runners each night also gave us Tourers a challenge each night!

What both tours have in common is the across the five nights of the Tourists (in Fife) or Tourers (in Clydeside) and the opportunity for great racing across five nights.  I really enjoyed my running over in the West of Scotland a chance to run against different people over different courses where I hadn’t run before.

It was a lot of travelling over the five nights but I think it was worth it and would say to anyone tempted next year to have a go to go for it, you won’t regret it.

Huge thanks must go out to all five running clubs who organised the events, the marshals who were encouraging no matter what the weather and to my fellow Tourers who ran with me over the five days and the Tourists who joined us each evening.

With thanks to Kenny Phillips and Glasgow South Road Runners for the photographs.