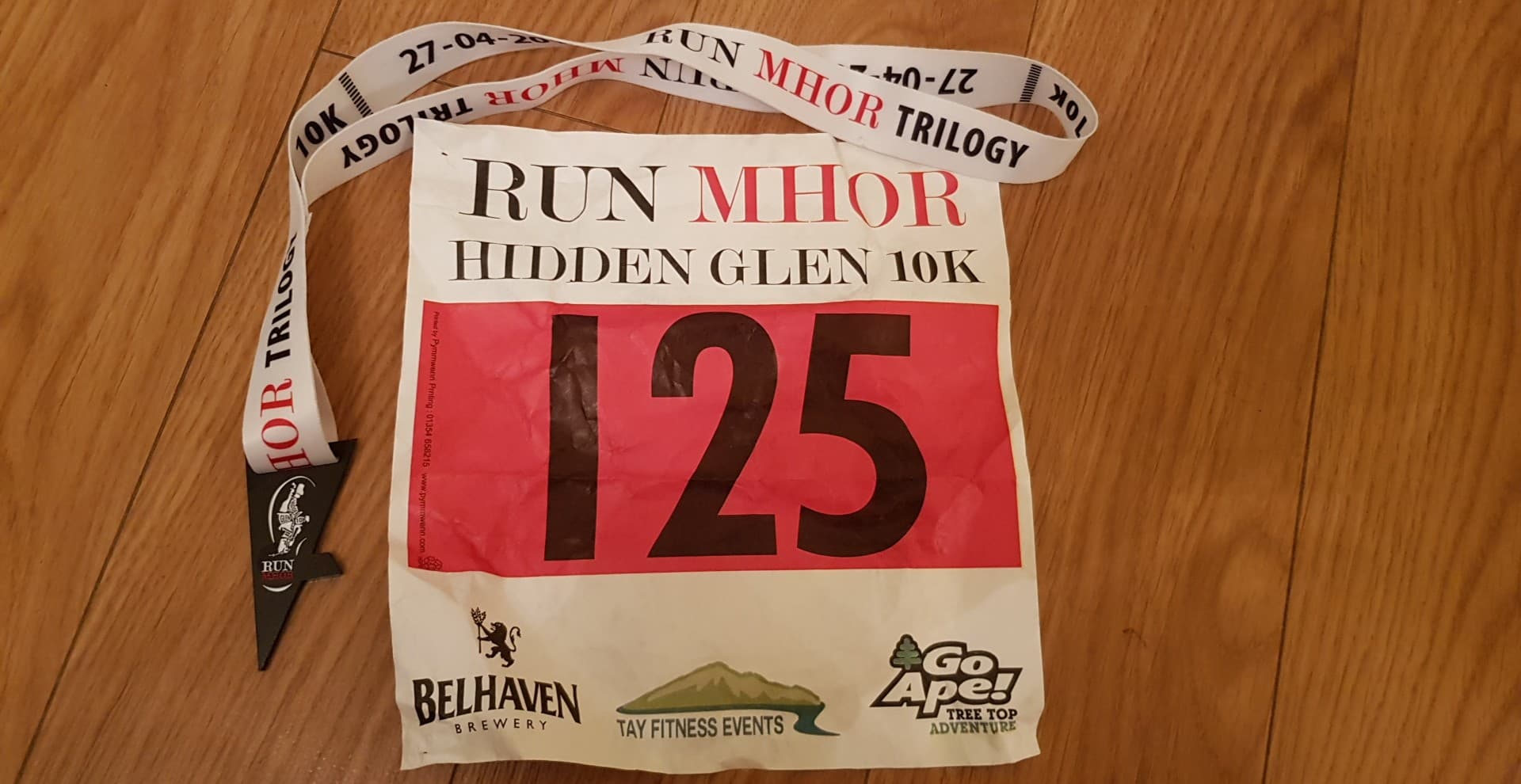 Torrential rain, mud and deep puddles were the order of the day for the Run Mhor hidden glen 10k on Saturday 27th April. It’s the first event in a trilogy of races of increasing distance, with a half and full marathon scheduled in June and August respectively.

The race begins at Monachyle Mhor hotel in Balquidder which is tucked away on a remote single track road between Loch voil and Loch Doine.

The 10k route includes a short westerly 2k out and back on the road before heading north past the hotel to a trail route up through the hidden glen – up being the operative word here – before a swift 180 turn back down to head to the finish at the hotel.

Considering the remoteness and relatively small size of the venue and the influx of an anticpated 450 entrants plus cars and supporters this was surprisingly well organised with plenty car parking – albeit waterlogged and muddy – in an adjacent field next to Loch Voil. The organisers had opted for a festival feel with music, tents and food available in the grounds of the hotel with changing tents for all the runners.

The race set off in waves with 3 minutes in between each start with speedier runners going first. The initial out and back was pretty much single file due to the narrowness of the road and the front of the pack already on their way back and could be best described as ‘lumpy’. 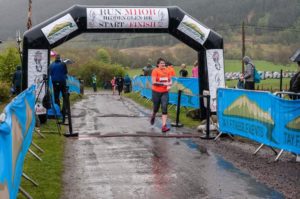 The climb up to the trail at the 2k mark came around all too soon and included a run up a muddy field and straight through a fast flowing stream. Anyone uncomfortable with mud and sodden wet feet might be considering their race choice here. A water station with jelly babies was placed at the 3k mark on the opening into the main trail. Unusual for a 10k but definitely welcome.

The climbing continued up through the beginning of the trail before crossing a bridge in to the glen. Ben More is visible on the left here as is Monachyle burn but it’s unlikely many were sight seeing in the torrential rain. By the 5k mark it was an enforced single file due to speedy runners coming back down although many (including myself) were opting for hike/attempted run by this point.

The turn back down came around 6.5k where another water station was positioned and a poor drookit bagpiper played in the soaking wet. He seemed fairly chipper considering. So steep going up and steep going down. The down meant an opportunity to let the legs loose but the slippery conditions and continued single file with runners still climbing did restrict this but crashing down the trail through foot deep puddles and mud was still very enjoyable.

The finish did not follow back through the field at the back of the hotel but instead continued down to the beginning of the trail opening with a very cheeky wee final hill thrown in around the 9k mark. The trail opened onto the single track road and followed back round up to the finish/start at the hotel.

A bottle of water and medal were handed out at the finish with a free pint of beer available at the bar. Those opting to enter the full trilogy of events were presented with a puzzle medal which will interlock with the 2 medals from the half and full marathon races to form a unique keepsake.

Overall an excellent, well organised event in fairly dreich conditions. Spectators were also well covered with the refurbished barn which forms part of the hotel offering hot drinks, food and cakes during the race. With over 800ft of elevation this is most definitely not for those looking for a PB – results ranged from an eye watering 36 minutes to 1hr 42 – but its extremely enjoyable if you can grit your teeth for the climbing between 2 – 6.5k. I’ll definitely be back for another bash next year.