Club member Isobel Burnett won a gold medal in her age group category at the National Masters Cross Country races held on Saturday 8th February at the McMaster Community Centre in Johnstone. Isobel finished 36th overall in the women’s race in a time of 29.55. Conditions were challenging with blustery winds (the forerunner of Storm Ciara) adding to the twisting undulating muddy nature of the course.

Isobel is no stranger to success. In November she was, once again, part of a Scottish team competing in the British and Irish Masters CC International at Liverpool, coming 5th in her age category and leading the Scottish team to third in their age category.

Closer to home, she has been a regular competitor in the East District Cross Country League races this season, helping the Carnegie Harriers Masters Women’s team secure second place overall in the series of three races. Many congratulations Isobel. 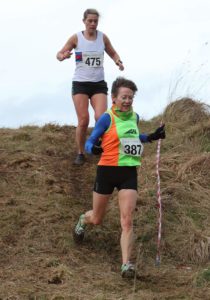