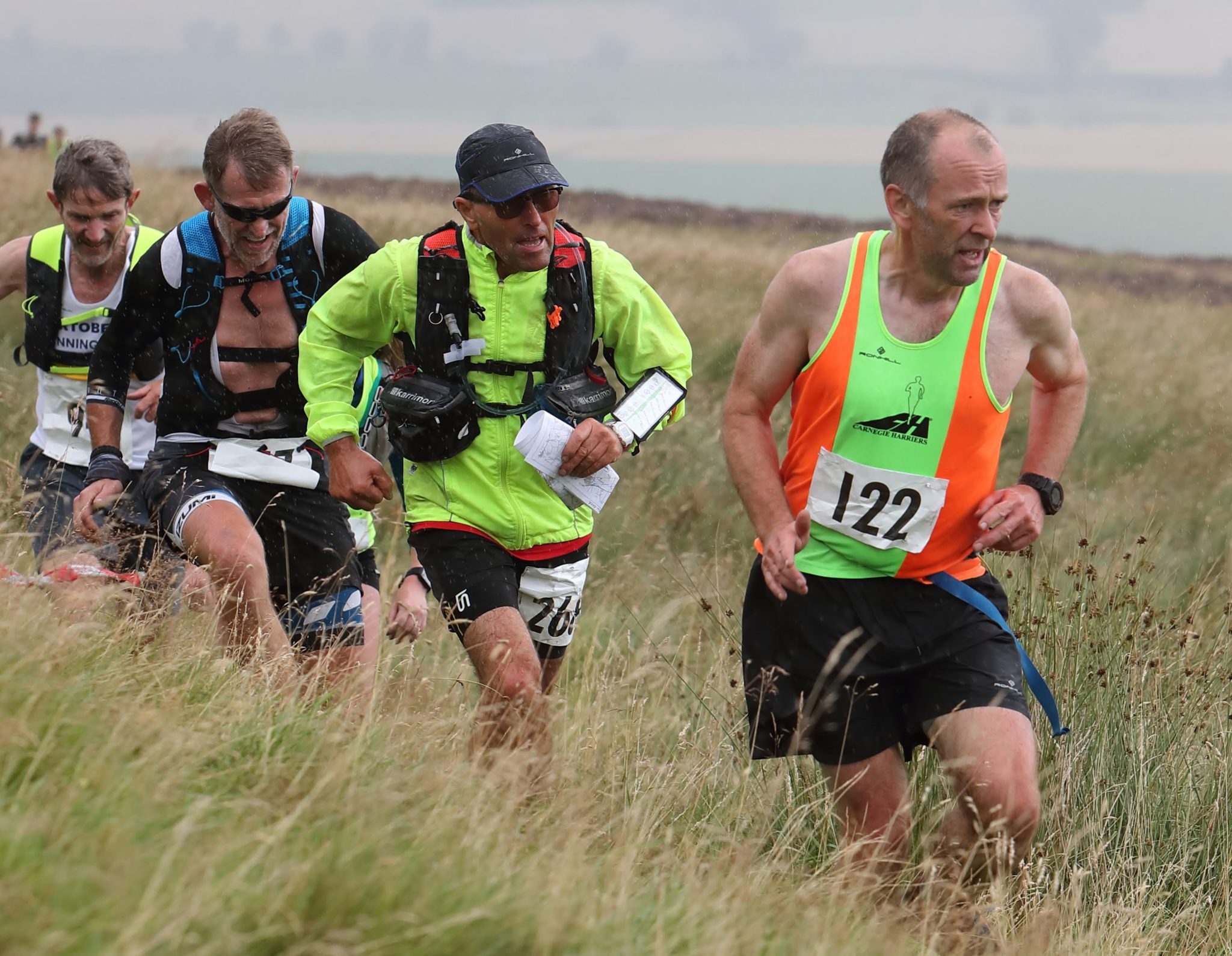 On Sunday the 18th August 10 Harriers lined up for the 48th Lomond of Fife Hill Race. This was the 13th race in the club GP and in the men’s competition with grand prix Kevin Davie not running there was a chance for others to close the gap on his lead. The women’s race saw the Egle Laurinaitye return to racing for the first time in year due to injury. The race route has changed slightly over the years and there was a last minute change to the race route this year due to the weather conditions. Last year there in wet conditions there were a number of casualties from the steep “bumslide” descent of West Lomond. There had been a lot of rain in the lead up to the race as well as on the day so the organisers rerouted the race to come down the Northside of West Lomond.

The race started just outside Strathmiglo and headed south along a tarmac path before going on to a short single file trail up which leads to the main forestry track. From here we headed east along the track and I was aware, having recced the route a week earlier, that we needed to pick up a single track which was the start of the climb taking us towards East Lomond. Because of the fast start I was following a group in front and realised after about 150 meters that I’d missed the turnoff. then heard a few shouts behind calling us back. Some runners continued forward but most turnback back including Egle and Neil McLure who also recced the route with me a week before. Could not believe I’d missed the turn, but just one of these things. Getting back on track and joining the que of runners climbing the hill. Dropped a number of places here and had to be patient to pass as there was little room on the climb. I caught back up with Michelle Best, Colin Reynolds and David Greig on the climb up to East Lomond. Neil passed me and started to catch up with Derek Cassells and Peter Simpson. I was nearing the summit of East Lomond Derek, Peter and Neil were all close together with Egle not far behind me.

The weather turned, getting windier and raining heavily on the way to West Lomond as we followed the main tourist path. looking a head I could see the Neil was now first harrier making the ascent from the west side, whilst Derek and Peter approached the summit from the North side. I followed Neil’s route choice thinking it was more direct. On reaching the summit we followed the new route, which was marked, down to and round the Bunnet Stone before the final short climb to the last checkpoint. Neil had a good lead over Derek and Peter at this point. From this final check point you make a tricky decent over uneven ground back towards the forest we started from. At this point I was having a wee battle with Egle as she came flying passed on the descent and had to work hard to catch up again. Once back in the forest you follow the forest track for about half a mile before turning off the track and heading back towards Strathmiglo. On reaching the finish I saw Derek and Peter but no sign of Neil. I just assumed he had heading back to the village hall to change. Derek and Peter had a close race throughout with Derek finishing in 15th place over all in a time of 1 hour 50 minutes and 3 seconds, Peter was only 6 seconds behind picking up the first M60 prize. Egle finished 27th overall in a time of 1 hour 54 minutes and secured 3rd female which was a great achievement in her first race back. David was the 5th harrier home in 36th place with Colin just piping Neil by 1 second to 48th place in a time of 2 hours 6 minutes. I turned out Neil didn’t make the descent to the forest and stayed up to high adding in extra mile. Michelle Best currently leading the female grand prix was next home in 2 hours 10 (58th place) with Lesley Reynolds finishing in 2 hrs 17 (68th place) and Phil Smithard finishing in 2 hours 54 minutes in 86th place.