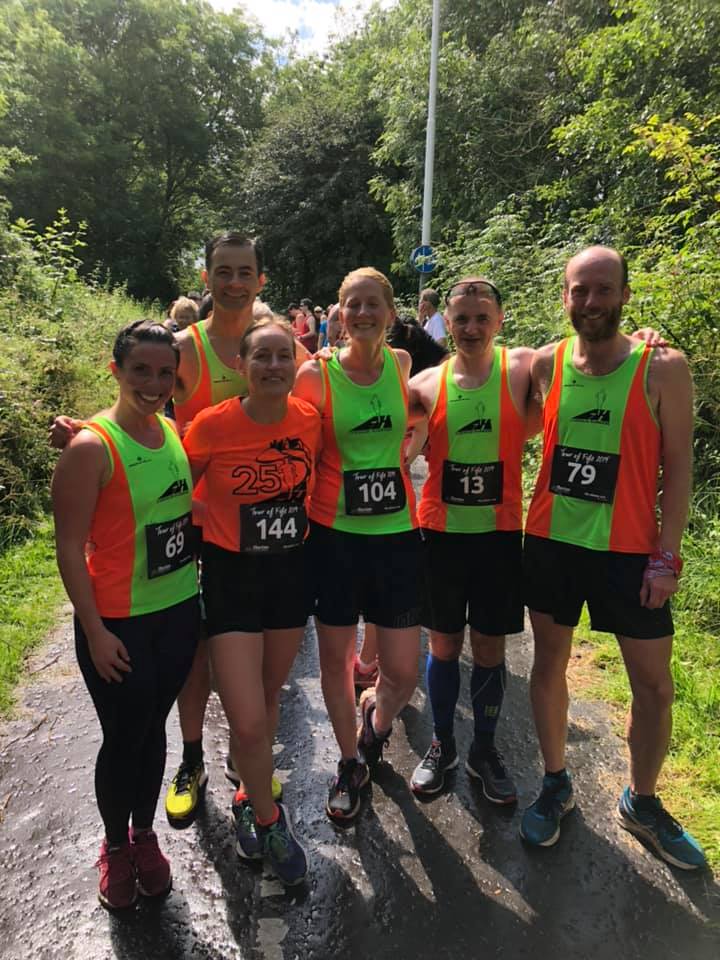 Tour of Fife – day by Day report b Michael Bisset

The Tour is a unique event – five races over five days with your overall time counting towards your final position. There is something for everyone in the five races taking place on sand, hill, road and trail. Distances range from 1 mile to just shy of 10km.

This year 6 harriers took on the challenge. 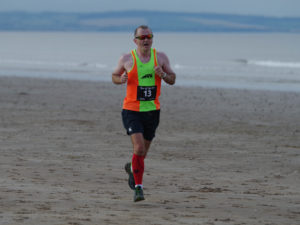 Conditions for this race ended up being very good. We managed to miss the rain completely. The race is quite simple out along the West Sands for 2 miles and run back. The reality is a different matter. When you take the turn the sand turns soft and is hard to run on. It saps the legs, just what you need on day one of five!

Thankfully there was little wind and the six harriers were all able to post some good times. After the race there was the obligatory dip in the sea. It was chilly! Thanks to Gordon and Clive for making their way up to St Andrews to support and take photographs. Sadly, Gordon had to pull out due to injury this year. 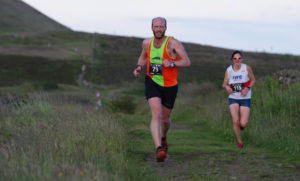 Thunder storms were forecast for Thursday thankfully they did not come to fruition instead it was hot and muggy. A tough hill race was in front of us. The majority of the Harriers taking part would not consider themselves hill runners but gave it their best shot.

The race itself was similar to leg 4 of the Burden but in reverse. Starting in the forest a run (kind of) to the gate and the climb up East Lomond began. This was sapping to say the least. Reaching the top Gordon was waiting for us again to cheer us on! Over the top and then the descent to the path. Easy if you are a hill runner, very impressive seeing them throw themselves off the hill. For the rest of us it was a rather careful step down or bum slide down to the path. Afterwards a mostly down hill trail run into Falkland Estate.

This is where the tour comes into its own. By far my worst race and ended up dropping 21 places in the rankings after this. Great for the hill runners and their chance to be in their comfort zone. They were not so happy when it came to Race Three I imagine……. 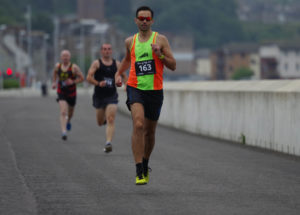 What it says on the tin. Sprint from one end of the prom to the other, as fast as you can. After two days on hill, trail and sand this was a welcome return to the tarmac and time to make up some of those lost places.

We were set off in twos or threes according to our positions in the tour after two days. Going off in reverse order was interesting as we were able to see what the front runners looked like at the end of the race for a change!

The race itself is flat and fast. With no turns on the course it has great potential for a PB. The Harriers posted some great times despite the fact that it was Day three of the Tour.

This is where the Tour comes into its own. The races within races. Of course there was the race at the head of the field to see who would come out on top. Within the pack of 150 runners we were all checking each other’s results to see who was around us and friendly rivalries are built up. A great rivalry was between Alan and Jonathan from the club as they swapped positions throughout the

Tour. Alan leading after race one, Jonathan passing Alan after the Hill race. All to play for at the end of the Mile. 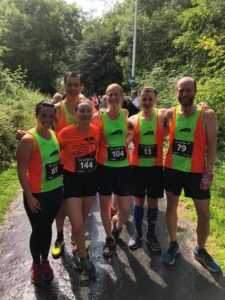 Taking place on the cycle paths near the Lomond Centre it is an out and back. People say it is flat – it is mostly with a short climb at the start. In many ways this is a tough race coming less than 24 hours after the mile sprint in Kirkcaldy.

Hot conditions met us on Saturday afternoon – during the race the heavens opened with an almost tropical rain storm but it helped to cool us all down a little.

A narrow course but with only 150 competitors we were all able to have our own space and run freely. The slight uphill start of course gives a slight down hill finish and the chance to pick up a good time. A couple of Harriers picking up PB’s.

Gordon was back out supporting the harriers again as were the welcome sight of Barry, Karen, Sarah and Neil at the end of the race.

The last race and also the longest race in classic tour style. It was a tough one to finish with too. The race takes in part of Leg One of the Burden and part of the Trails of Fife route. Starting not far from the cricket ground and running up to the beech hedges you enter the trails towards Strath, up the Hill of Hope and back onto the trails. Another passage downhill before a climb to the Beech hedges and back to the finish.

Before the start it was time to have the obligatory check on our competitors within our own little races, how many seconds ahead/behind were we. These rivalries make the Tour and help you on the last day when the legs are beginning to tire. It was a hot, muggy day again and quite tough conditions. There were times when we had to walk up some of the hills. The support of our fellow racers helped to keep us all going. Once back at the beech hedges a nice downhill to the finish.

Barry, Karen and Clive were out on supporting and photography duties once again.

Then it is all over in a flash. All that is left are the memories of a great week. It is great to be part of a Carnegie during the Tour the support we all got and gave was fantastic. This year the Harriers had three debutants to the Tour Kerry Hunter, Alan McGowan and Sarah Marshall. Zuleika Brett returning for her third tour, Jonathan Millar returning for his fourth tour and Michael Bisset returning for Tour number 8. All had ups and downs during the week but put in great performances encouraged by their team mates and fellow competitors. All had their own mini battles with the people around them. For the record Alan finished just above Jonathan in their own mini battle, it went down to the last race though.

Looking through the results of the Harriers shows what a wide spectrum the club has. Jonathan and Zuleika had their strongest race on the hills, Alan, Michael and Kerry had their strongest on the mile while Sarah strongest was both the 5km where she got a PB and the trail race.

Thinking about doing the Tour next year? Do it, you will not regret it. It is one of the most inclusive events out there. It does not matter where you are in the field, we are all “tourists” together. A great event put together by Fife AC. Thanks to them, also thanks to the photographers who were out there over the past five days. Roll on 2020. 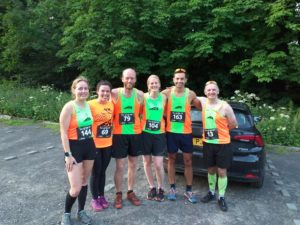