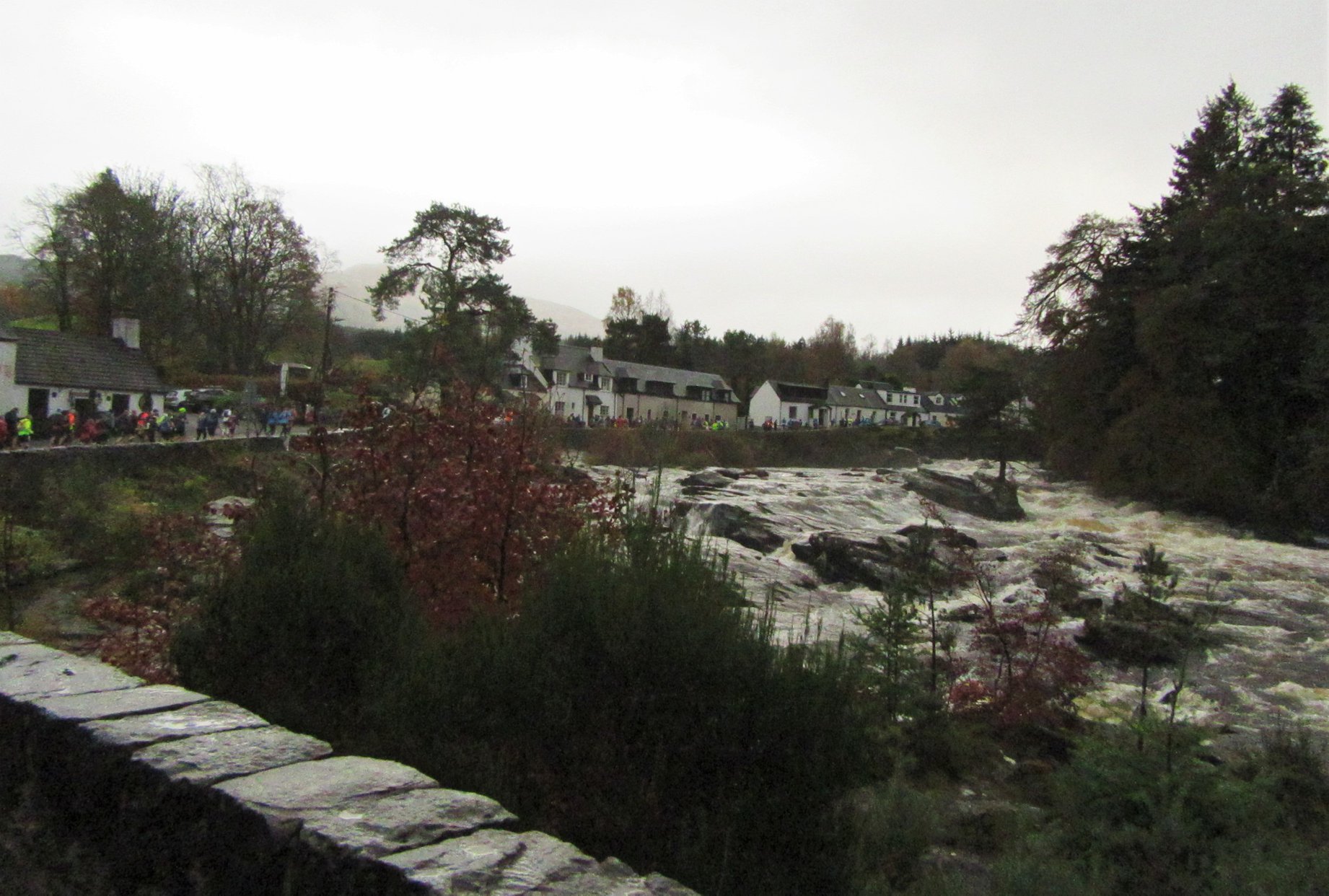 On Saturday 3rd November an intrepid bunch of 13 Harriers made there weary way to  to Killin for the popular Glen Ogle 33 mile ultra-marathon. Carnegie were definitely one of the best represented clubs on race day!

The weather forecast had been changeable all week from dry to wet and back to dry again. That unpredictability was evident as the runners lined up at the McClaren Hall in Killin for a very wet start. 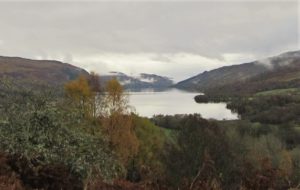 The race started in the village and wound across the bridge over the Falls Of Dochart, which were stunning, before quickly turning left into the woods for an arduous climb of 3 miles on forest tracks that were slippery, muddy and treacherous. After the wet start the weather suddenly brightened up, as runners started to discard the winter clothing for fear of overheating early on in the race. By mile four the terrain changed to some flatter cycle track, following the forestry road, allowing runners to get into their stride, and really begin enjoying the race. We continued to descend to cross the A85, for the run along to the Glen Ogle Viaduct passed Lochearnhead. At this point I ran with David Henderson for a few miles, which really helped to pass the time, although we stopped chatting on a number of occasions to admire the stunning views.

Once the cycle path over the viaduct was safely negotiated, we arrived at the downhill switch back section allowing the pace to be picked up on the descent down to Balqhuidder (around 13 miles in at this point), then onto a relatively flattish section towards Strathyre (although there were off course one or two sharp hills), where the only check point on the course at mile 18, was waiting. I negotiated the switch back downhill section with a couple of runners from Cumbernauld, running the race for the first time. Don’t think they were too pleased when I informed them that we had to run back up this steep switch back section in about 2 hours time, so I picked up the pace and left them behind!

The much-needed checkpoint at Strathyre appeared, as we topped up on liquids and munched on whatever we could get our hands on, to get some much-needed sustenance for the climbs ahead! I chatted to Steve Honeyman for a few minutes while I scoffed my banana, Kit-Kat and Hula Hoops. Marshals gently pushed wavering and exhausted runners to get going again, and soon the long climb up to Kingshouse loomed into view. I found this the hardest part of the race. Many runners shuffled or walked up  this steep muddy, wooded section waiting for the energy kick from the food taken at the recently departed check point! . Once the hilly section was negotiated however, you know you are now on the way back towards Killin. Soon the dreaded ‘switch back’ hill appears again, that takes runners up to the 4 mile run back towards the A85 crossing, that again includes the stunning views from the Glen Ogle viaduct. Mentally this part is tough, as you hit the marathon mile mark and wonder if your body can hold out for another 7 miles! Personally I started to walk for the first time and adopted a walk, run strategy to ensure reaching the finish in one piece, as the cramp started in my left calf and right quad! a good few runners passed at this section which is also mentally tough to deal with.

The rain stayed off thankfully, as we again crossed the A85 for the long descent back down to Killin, along cycle route 7. After another 4 miles or so, Killin village is upon us, where we have the twist in the tale of the sadistic loop of the park (why?) before crossing the finish line and collecting the excellent finishers bag (complete with Irn Bru, Tunnocks wafer, sticker and Cider!). Once dried and changed we heartily tucked into the great post-race buffet!

The chat after the race concerned how benign the conditions had been in comparison to previous years, with the consensus being it had been an brilliant race and day.

First Harrier home was Stuart Paterson who finished an awesome 2nd overall in a superb time of 3:42:03, with Alan McGowan 2nd Harrier home in a great time of 4:34:16 with Ben Hopkin 3rd in 4:50:13. Kerry Hunter and Sarah Wellcoat, competing in there first Ultras, were 1st and 2nd Female Harriers to cross the finish line at Killin, and I am sure they are still buzzing. Well done to all Harriers who completed the race with some excellent times and PBs recorded.

A massive thank you to the BaM racing team and the hardy band of volunteers/marshals who smiled and cheered all day across the route GO33 is a friendly race in stunning countryside location.

For those that broke there ultra cherry, we will see you next year!