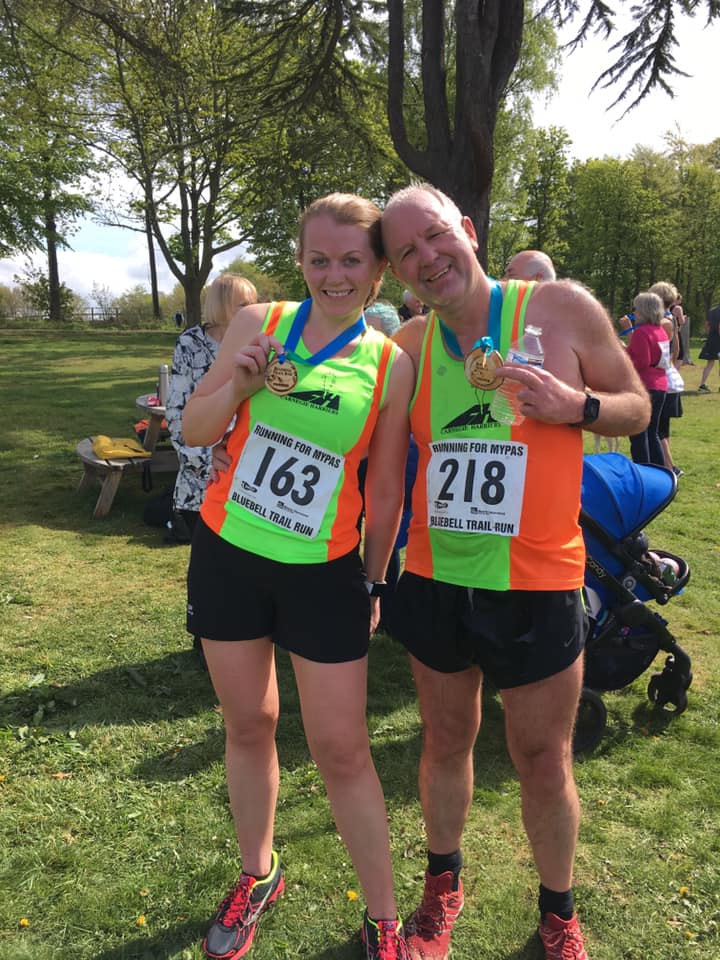 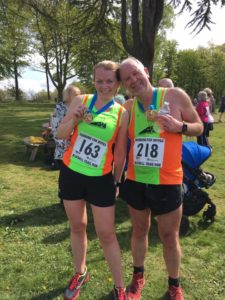 Sunday 28th April saw the small, but perfectly formed, team of two Carnegie Harriers ( Stevie Greer and Kathryn Fairfield ) travel across to Dalkeith for the second Bluebell Trail 10km.  The event takes place in the picturesque surroundings of Dalkeith Country Park, and it was looking particularly bonnie on Sunday in the spring sunshine.

The day involves a 1km race for wee ones, followed by the 5km and 10km which start at the same time.  The organisation was very good and all very relaxed and clearly family orientated. After the kids race had finished there was a short wait before the group warmup, which involved a very cheerful fitness instructor shouting out various funky moves over a blaring soundtrack. Stevie’s moves could have won him a spot on the next series of Strictly… There were runners wearing both road shoes and trail shoes, we both opted for trail, as it was unclear how muddy the conditions were.

The mass start, approx 700 runners for both distances combined, lined up in 4 loosely arranged pens.  After the starting hooter signalled the first wave off the next wave shuffled closer to the start, but with the timing chip safely attached to your ankle you didn’t need to panic about your start time being recorded incorrectly. The race starts off by crossing the bridge and heading on a fairly flat road into the forrest. The first few kilometres were a mix of woodland trail and stoney tracks, which were quite narrow at points.

There were plenty of marshalls and motivational signs along the route and plenty of encouragement. About this point I began regretting the trail shoes as there was hardly any mud and my feet were a bit sore….. At about 4km you enter the actual ‘bluebell wood’ which appears after a lovely descent. It is very pretty indeed – some runners actually stopped to take photos – but that quickly becomes a distant memory when you realise that you are about to encounter the aptly named Heartbreak Hill!! All I’m saying is that I prefer the hill in the Glen….. After battling to the top you make your way back across the bridge and for the 5km runners they were done. By this point it had got pretty warm and the realisation that Heartbreak Hill was obviously coming at the end of the 10km again saw my head go down a bit.  However that was soon to be remedied by seeing the cheery face of Karen doing marshalling duties, just after the water station.  The next km was predominantly narrow tracks and slightly downhill, which I knew meant more hilly pain coming my way.  A couple of very steep climbs and numerous twists and turns through the woods followed until the 8km sign came into view and some much needed ‘encouragement’ from my girls. Back into the trees after that and trying to focus on the pretty bluebells which were up ahead, rather than thinking about Heartbreak Hill. I’m not going to lie I’m glad nobody that I know witnessed my second ascent of the hill, but thankfully I made it to the top and then gave it all I had left for the 200m or so to the finish line!

Despite my moaning about the hills this was a great run, very cheap to enter (£10), lovely atmosphere and a nice wooden medal. There was also water and cereal bars etc at the end. Nobody seemed in a rush to head off at the end and some families were clearly making an afternoon of it and having picnics. Would be a good one for a larger group to do next year and make it into a wee day out!